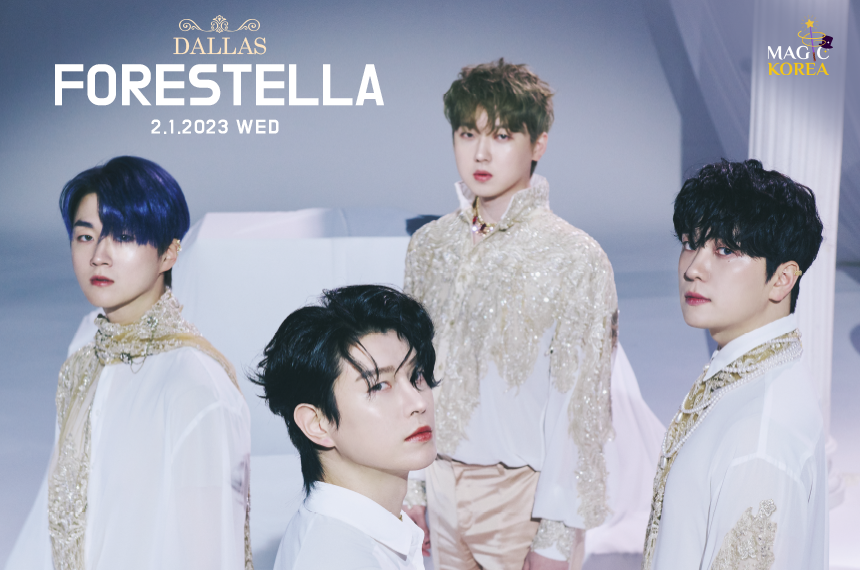 Forestella, which has shown the essence of high-quality crossover performances by selling out a number of national tours in Korea, will take on the challenge of an American tour next year. Forestella's music is also expected to captivate global audiences.

In particular, Forestella's actions are steadily expanding the scope of activities of the entire crossover music scene. Forestella recruited its first official fan club and established an unrivaled worldview in its first mini-album "The Beginning: World Tree" released this year, and recently successfully hosted its first outdoor solo festival following a national tour.

In addition, it is also stepping up its global activities by launching its exclusive reality "Forest Forest Recipe" content and airing it in Japan. Forestella's activities will lead to an American tour this time, drawing attention.

Forestella, which will also give global audiences an earful, is preparing for various music and performance activities at home and abroad, including an American tour.

South Korean four-piece Forestella came together as the winners of 2018's Phantom Singer 2, wowing audiences with their eclectic mix of classical standards, pop covers, and reworkings of traditional Korean music. Releasing their debut album, Evolution, that year, they went on to deliver numerous singles and two further albums, including 2021's, The Forestella.

The quartet -- consisting of Bae Doo-hoon, Kang Hyung-ho, Cho Min-kyu, and Ko Woo-rim -- had all auditioned separately for the South Korean reality singing competition Phantom Singer 2, eventually reaching the final 12. Put into a quartet, the four vocalists opted for the name Forestella and went on to win the competition with their imaginative versions of contemporary pop songs. Signing a year-long deal with Arts & Artists the group issued their debut album, Evolution, shortly after the show's finale, with the release peaking at number 13 on the Korean charts. Forestella headed out on tour in support of the album and took part in the TV show Immortal Songs: Singing the Legend. At the beginning of 2019, their cover of 's "Bohemian Rhapsody" from the show went viral, earning the group fans across the world. Their sophomore album, Mystique, appeared a few months later and once again showed the group's ability to rework and reimagine traditional songs and contemporary pop. Toward the end of the year, the members decided to take a hiatus, with Cho and Kang releasing their own material, Bae returning to musical theater, and Ko focusing on his studies. After a handful of singles in 2020, the group started 2021 taking part in a special edition of Phantom Singer, which saw previous winners and contestants return. Following the show, the group issued their third album, The Forestella, which included their previously released singles alongside new material. 2022 saw the four-piece return to the studio to record their first EP. Issued in the May, The Beginning: World Tree, peaked at number 14 on the Korean charts. ~ Rich Wilson, Rovi