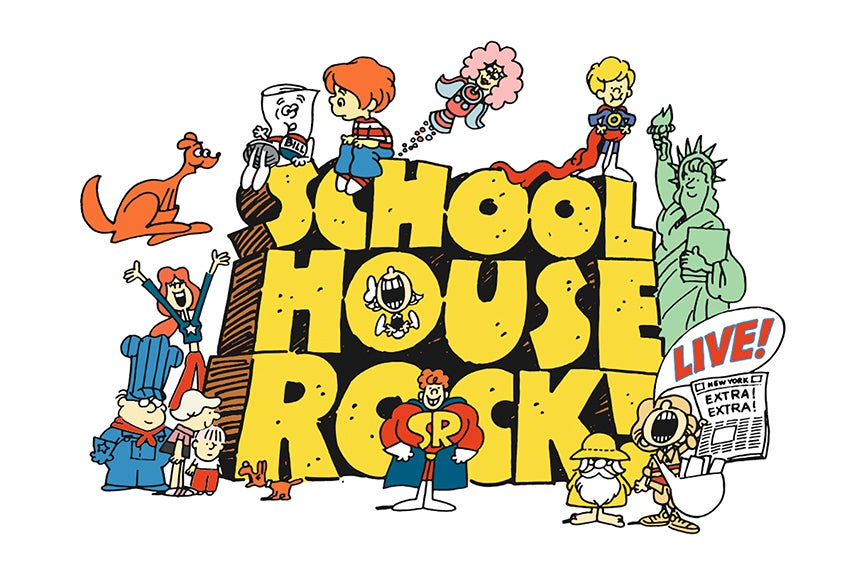 A pop culture phenomenon comes to the musical stage in Schoolhouse Rock Live! The Emmy Award-winning 1970s Saturday morning cartoon series that taught history, grammar, math, and more through clever, tuneful songs is not only making a small-screen comeback, it's lighting up stages everywhere – from school multi-purpose rooms to university and regional theatres all around the country.

Schoolhouse Rock Live! follows Tom, a nerve-wracked school teacher who is nervous about his first day of teaching. He tries to relax by watching TV, when various characters representing facets of his personality emerge from the set and show him how to win his students over with imagination and music, through such songs as "Just a Bill," "Lolly, Lolly, Lolly" and "Conjunction Junction."  Academic subjects will never seem boring again when Schoolhouse Rock Live! Explodes onto the stage with the songs you loved updated for a whole new generation!

Child's Study Guide about the Show

Click Here for a child's study guide to the show!

Flex Season Package Deal, 10% Off when you purchase ticket to 4 or more shows!

Purchase tickets to 4 or more shows at one time offered in our 2021-22 Season and receive 10% off on all tickets purchased.

Click Here to See the Full Season & to Buy Tickets!

The great reviews continue to roll in! This one is from the performance of AMON! The Ultimate Texan, that we did back in July! We're so proud of the Coppell Arts Center and our wonderful family of staff members but it's the support from our community that allows the shows to go on! See what's coming up by visiting us online: CoppellArtsCenter.org
Earlier this week, members of the Coppell Parks & Recreation team dropped by to congratulate us for a successful grand opening and TAKEOFF Arts & Musical Festival. 🎀 We are so grateful for all the City of Coppell staff and volunteers who made this weekend possible. Thank you! 😁
Look at this little group of sunflowers! 🌻 Everyone enjoyed last night's Paint & Sip, presented by Createria Studios! 😁 Will you be joining us for next month's on October 20th? 🍂 Tickets sell fast! Reserve your seat today at CoppellArtsCenter.org
Who else watched Schoolhouse Rock growing up?! 🙋‍♀️ Come and relive the nostalgia with The Coppell Arts Center! Schoolhouse Rock Live will be here on October 16th with performances at 2pm and 6pm. Bring the whole family and come rock out to some fun and educational jams!
Join us this Saturday, September 18th from 9am-12pm for the Coppell Community Chorale's Recycling Fundraiser! ♻ Items can be in any condition--damaged, non-working or fully operational! Simply bring your items to the Coppell Center for the Arts parking lot on the event date. Your non-cash contribution may be tax deductible (receipts available).
Coming up next at The Coppell Arts Center is The Buddy Holly Story! Don't miss out on seeing the "World's Most Successful Rock 'n' Roll Musical!"🎸 Go to our website, https://www.coppellartscenter.org/events/detail/buddy for more information and to get your tickets!
The Center is CLOSED TODAY for a private event. We apologize for any inconvenience. In the meantime, check out all our upcoming events at our website: www.coppellartscenter.org/events
🌻Friendly reminder that our monthly Paint & Sip is Wedneday night, 9/15 at 7pm! This month we are painting a Sunflower! Come wine down with us and create a masterpiece you can take home! 🍷 You can get your tickets here! https://www.coppellartscenter.org/events/detail/paint-and-sip-sunflower
🤯 Magician Mike Super's 3 PM performance is sold out, but there are still tickets available for 6 PM TONIGHT! Save 15% with promo code 15SUPER. 💲 Buy tickets here: https://www.coppellartscenter.org/events/detail/mike-super
😄 We had a blast with @coffeyanderson and @mattcastillomusic yesterday! 🤠 And we just can’t wait for @kchenoweth tonight!!! 🤩
Did you see the Mayor's interview about our Takeoff Weekend? We are absolutely thrilled to finally kick off our grand opening! Join us today for the Ribbon Cutting Ceremony! 🎀The celebration continues tonight with Coffey Anderson and Matt Castillo in concert at The Coppell Arts Center! We hope to see you this weekend! 🤩
Did you know that we have a foundation AND that The Coppell Arts Center Foundation is on Facebook and on Instagram? Give them a follow and checkout their booth during the Grand Opening 'Takeoff' weekend! You can even get your name on the donor wall!
We can't wait until you have a chance to come experience the Coppell Arts Center! Here are a few things you can expect and also how you can get involved if you would like to support our growing Arts Community! See you soon! CoppellArtsCenter.org
🎀 TAKEOFF Arts & Music Festival begins TOMORROW with the Art, Sip & Stroll benefitting the Coppell Arts Council. 🍷 Stroll the Art in Old Town Coppell with a glass of wine or cold beverage while enjoying public art, musical performances, and tasty food truck offerings. 🖼🎼 Click here to buy tickets: https://www.coppellartscouncil.org/artsipstroll
🎀🎨🎶 Our official grand opening TAKEOFF Arts & Music Festival begins in just a couple days! We can't wait to welcome you to the brand-new Center! 🤗 Have you bought your tickets? 🎫 https://www.coppellartscenter.org/events/takeoff
Don't miss out on your chance to see Mike Super next Sunday, September 12th at 3pm and 6pm! This show is wonderful for people of all ages and is sure to be ✨magical✨ For more information and to purchase tickets to this event, go to our website: https://www.coppellartscenter.org/ We hope you'll join us for a day full of magic and illusions!
🎉🎉We are ONE WEEK away from Broadway star Kristin Chenoweth taking the stage at The Coppell Arts Center! Do you have your tickets for this once-in-a-lifetime chance to see Kristin in such an intimate venue? We are so excited to host this concert, and we hope to see you there! Check out our website: https://www.coppellartscenter.org/ for more information about our TAKEOFF weekend and to purchase tickets!
🎨 Coppell Lovers & Besties, don't miss TAKEOFF Arts & Music Festival next weekend, starting with the Coppell Arts Council's Art, Sip & Stroll! 🖌 #CLB
Bring your momma, bring your grandma's dog to come see Coffey Anderson at The Coppell Arts Center! Coffey will be here with opener Matt Castillo on September 10th at 8:00pm! Check out our website for more information and to purchase tickets: https://www.coppellartscenter.org/events/detail/coffey-anderson We hope you'll join us for some great country music! 🤠
The Coppell Arts Center is looking for friendly, outgoing people to serve as volunteer ushers and docents at performances and events. If this sounds like you, we'd love for you to visit our website and register to volunteer! Learn more about our wonderful community of volunteers here: https://bit.ly/CoppellVolunteers
🎸 Coming in September, Texas Born Country Music Artist, and Social Media Super Star, Coffey Anderson! You won't want to miss this show. Visit our website to reserve your seats now! 🎟 Click here: https://bit.ly/CoffeyAtCoppell
Did you miss the Coppell Community Chorale's Spring Mix Tape Concert? Have no fear!! You can now watch the concert in its entirety by visiting our YouTube channel! Check out the replay by clicking below; you're guaranteed a seat! https://youtu.be/7R_jB7ge1GI
The Coppell Arts Council and Coppell Creatives present a spotlight of two talented local painters: Holloway O'Brien and Julia Ross. 🎨 O'Brien is a trained commercial and fine artist who specializes in portraiture, while Ross is an internationally represented abstract impressionist. We encourage you to visit the Center to view the artwork in person today!