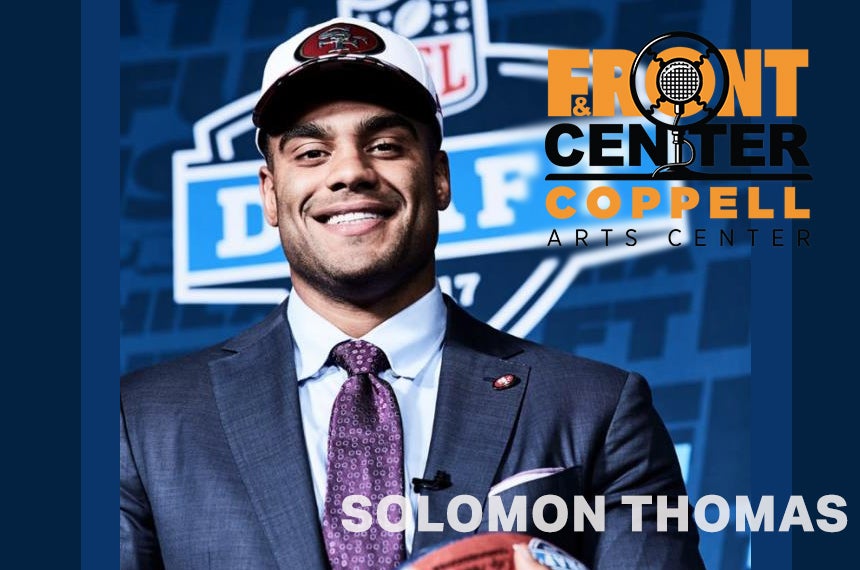 April 3rd at 6 pm in the Main Hall

Front & Center is a topical speaker series that will have an annual theme focusing on significant national and global discourse. The series will bring renowned thought leaders to share their authentic, unique perspectives on the year's topic, provoke self-reflection, and conclude with a Q&A with audience members.

The 2021-22 Front & Center speaker series will focus on racial inequality and inclusion in America. As our nation and the world mourn the senseless killings of George Floyd, Ahmaud Arbery, Breonna Taylor, and so many others, the conversation of racism in America is essential and overdue. To lead us with this important conversation and reflection, we will bring two thought leaders to the Main Hall: Carla Hall on February 6th, 2022, and Solomon Thomas on April 3rd, 2022.

Solomon Thomas was born in Chicago, Illinois, on August 26, 1995. Thomas and his family moved to Sydney, Australia when he was two years old, where he lived for five years. He attended Coppell High School in Coppell, Texas. He committed to Stanford University to play college football. He majored in communications.

Following the 2016 season, Solomon declared his intentions to enter the 2017 NFL Draft. He was selected 3rd overall in the draft by the San Francisco 49ers. Thomas was drafted by the San Francisco 49ers in the first round with the third overall pick in the 2017 NFL Draft. The man who drafted Thomas, newly appointed 49ers general manager John Lynch had by chance studied alongside Thomas as a mature student while working as a broadcaster for FOX Sports.

Solomon currently lives in Palo Alto area. His mother Martha and father Chris reside in Dallas, Texas. After suffering mental health issues and abuse, his sister Ella died by suicide on January 23, 2018. Ever since, Solomon and his foundation, the Defensive Live, has made mental health awareness and suicide prevention their mission. The Defensive Line Foundation is dedicated to end the epidemic of youth suicide, especially for young people of color, by transforming the way we communicate and connect about mental health.