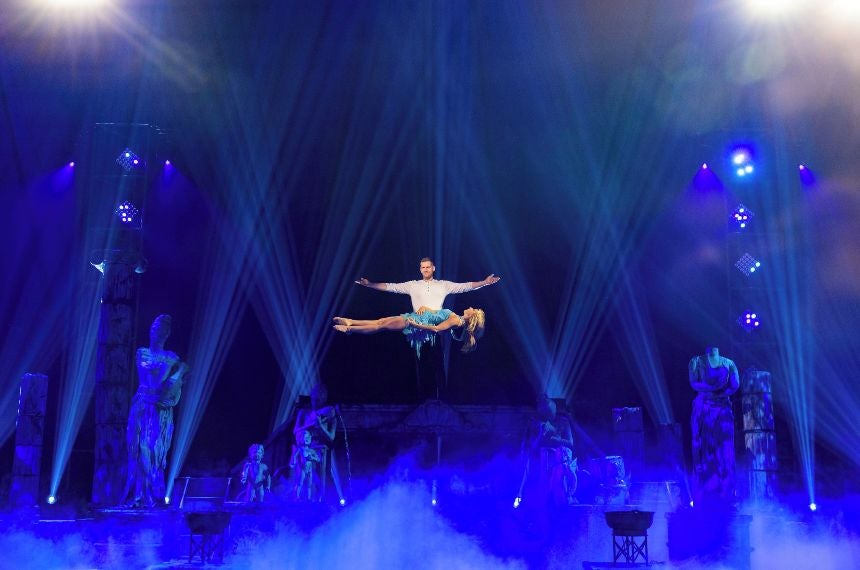 The Magic of Rob Lake

The Magic of Rob Lake

Sunday, August 28th at 2pm and 6pm in the Main Hall

One of the world’s most celebrated illusionists, Rob Lake’s mindblowing illusions dazzle and entertain millions across network television, in Times Square, on the Vegas strip, Atlantic City,  Atlantis Bahamas, and before sold-out audiences in casinos, arenas, and theatres worldwide.

His astonishing original illusions are uniquely presented as awe-inspiring storytelling on the grandest scale.

Named “The World's Greatest Illusionist” by NBC, Rob is internationally renowned for his mesmerizing and award-winning illusion spectacular.

Enjoy a summer evening in our air-conditioned performance hall! We have just TWO WEEKS until THE FOUR C NOTES perform the music of Frankie Valli and The Four Seasons LIVE here at the Arts Center! Saturday, July 16 at 7 PM Tickets: www.coppellartscenter.org
We have just TWO MONTHS until magician ROB LAKE takes the stage at the Arts Center! Witness gravity-defying illusions, mystifying magic tricks, and MORE! The Magic of Rob Lake comes to town for TWO PERFORMANCES ONLY! August 28 at 2 PM & 6 PM. Buy tickets for the whole family at www.coppellartscenter.org!
Happy Birthday Richard Rogers! Oklahoma!, South Pacific, The King and I, Cinderella, The Sound of Music, need we say more? Richard Rodgers’ compositions were the soundtrack to the golden age of American musicals.
We're excited for the return of Make and Take Children's Crafts, plus the fantastic artwork on display at the Center as part of the Mr. Cooper Group Lobby's Locally Sourced exhibit. See what's happening this week at https://www.coppellartscenter.org/events/this-week-at-cac
The Coppell Community Orchestra is having a flash sale for their Summer Chamber series with $10 TICKETS!🎟️ Today only from 10am- 10 pm! Use code CC010 at checkout.
This concert will have you singing "Oh, What A Night!" That's right - you won't want to miss the music of Frankie Valli and The Four Seasons as performed by tribute band THE FOUR C NOTES! Coming to Coppell next month on July 16 at 7 PM! Buy tickets today at www.coppellartscenter.org!
This unique group blends elements of bluegrass, blues, roots-rock and vintage swing to create a captivating, high-energy sound. Join us for a concert featuring Damn Tall Buildings on Friday, September 9 at 7:30 PM! Tickets: www.coppellartscenter.org
It's another great week at the Arts Center! We've got a brand new exhibit in the Mr. Cooper Group Lobby that features artists from around the City of Coppell, plus we're excited to host the world-class Summer Chamber Classics concert, benefitting the Coppell Community Orchestra. Check out more details at https://www.coppellartscenter.org/events/this-week-at-cac
Happy Father's Day from the Coppell Arts Center! We're grateful for all the dads who teach us, guide us, and support us.
Juneteenth acknowledges and celebrates the date the final remaining slaves in Texas learned of their emancipation. We are grateful Freedom Day, and happy to celebrate the first anniversary of Juneteenth's official recognition as a federal holiday.
It's World Juggling Day! This is one of our favorite stills from last year's Merry Cirque Holiday Spectacular. We're excited to see more juggling when Merry Cirque returns to the Arts Center in December!
One month from today! THE FOUR C NOTES will recreate the iconic sounds of Frankie Valli and The Four Seasons! Hear all your favorite songs from “Sherry” to “Oh, What A Night (December 1963),” and many, many more! Saturday, July 16 at 7 PM Tickets: www.coppellartscenter.org
There's still time to apply! There are still several opportunities available to join a great team, support the arts, and serve a wonderful community! See open positions and apply today at https://www.coppellartscenter.org/about/employment
He first stepped into the spotlight on NBC's America's Got Talent...and now he's bringing his mind-blowing magic tricks to Coppell this August! Master illusionist Rob Lake is in town for TWO PERFORMANCES ONLY! August 28 at 2 PM & 6 PM. Get tickets www.coppellartscenter.org!
This week is the last chance to catch L.Inking: Contemporary International Woodblock Prints exhibit before it leaves the Coppell Arts Center! Tickets are also still available for June's Paint and Sip, this Wednesday from 6-8pm. Be sure to check our website weekly for all the upcoming events we have at the Arts Center! http://ow.ly/Tu4I50JvntB
Will we see you on Saturday? Chase your blues away with BRIEFCASE BLUES! This tribute to "Jake and Elwood" is perfect for audiences of all types! THIS SATURDAY, June 11 at 7:30 PM! Tickets are still available at www.coppellartscenter.org.
We are proud to offer world class entertainment right here in the heart of Old Town Coppell. Check out what events are coming up this week at http://ow.ly/9ejx50JpCgj
ONE WEEK FROM TODAY! Briefcase Blues is bringing the hits of the Blues Brothers to Coppell for ONE NIGHT ONLY: June 11 at 7:30 PM! 🎟: www.coppellartscenter.org
We've got BIG plans for this space in the Arts Center, courtesy of the talented young artists in Coppell ISD's chapter of the National Art Honor Society! Stay tuned each Friday as we post work-in-progress photos of an exciting project before its official reveal later this summer. But first, a "before" photo...
Experience a Season to Remember with us in 2022-2023! SINGLE TICKETS ARE ON SALE NOW! Check out the video below for a sneak peek at each of the 9 shows we’ll be presenting. 🤩 Visit coppellartscenter.org or click the link in our bio to purchase your tickets today!